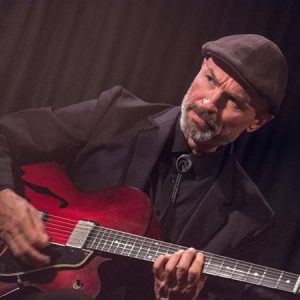 In this informative interview with Carl Dewhurst, I’ve learned to understand that Steve Flack has a lifelong love and passion for the guitar and his investigations and interviews reveal secrets into some of the most influential guitarists and musicians Australia has produced. These are valuable insights into their education, work ethic and careers as professional musicians. As a student of the craft, it is essential to understand what it takes to reach this level of performance.

Learn from the Greats

Steve tells me he is a “lifelong learner” so learning from some of the greats in the music industry has something that he has always been drawn to.

Steve teaches a structured grading curriculum through the Trinity College London Method at the  Liverpool Academy of Music, a staple institution for student musicians. The results have been outstanding with some of the highest exam pass grades. Yet, there are many paths to achieve success as a musician and this is what Steve digs into when he sat down to chat with Carl.

Carl describes his love of jazz from an early age in school where he received free lessons from his school music teacher. Carl’s hunger to learn the solo guitar and jazz led him into higher based music instruction, in which he studied under the great Dave Kane exploring standard jazz harmonies and experimenting with the lyrical side of Jazz, open forms of improvisation and free improvisation. You can find Steve Flacks (unbelievably free) popular improvisation lessons here.

It is widely understood that the importance of a structured learning foundation is crucial to develop core fundamental skills.

Theory and practice are key, so is active performances and practice. You have to be active. Carl reminisces about his time in New York during the 90’s, a time when New York  was the “real” New York, and he “connected on a deeper level”. A city that embraced Jazz music and was enriched into their culture. He was surprised at the deep knowledge the public would have of the genre but as he listened to legends like Miles Davis on his Walkman, he understood the origins of the sounds and was “representative of the place” (New York).

Carl remembers the performance ethics of Aussie Jazz master James Morrison, giving us a rare glimpse into his work ethic and mental strength needed to perform at a top level.

Carl says playing with James is like being on an “enormous wave, he generates an enormous amount of energy” and is always “playing at 100%”. It is important however, as Carl explains to his students at the Sydney Conservatorium of Music, in which he is resident teacher, “to be consistent” in practice and performance.

Carl explains to his students at the Con, the importance of mastering the craft is key to eliminating anxiety and insecurities “you create a solid core” that is “immovable”  which allows you to freely express your technique with confidence. Steve Flacks approach with the Liverpool Academy of Music and his online lessons strikes the right chord with his approach, in which core fundamental grading systems ensure the technique is mastered before moving onto more complex curriculum.

Carl performs exclusive solo pieces for Steve towards the end of the interview, demonstrating his flawless skill on several his personal custom guitars such as the Gibson plywood and the Yamaha.

This is a must watch for any aspiring guitarist or music fan in general. Enjoy and thank me later –

Steve Flacks technique and guitar method has now become available online for purchase. These lessons are curriculum based and structured to ensure progress and development of core guitar fundamentals.